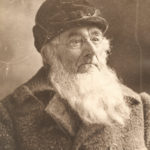 A Venerable Pioneer Is Wm. Goff of Sugar Grove

William Goff [1822-1914] spent his youth and early manhood among conditions which are always found in a frontier district. His educational privileges were extremely meagre, and he earned his first money when 12 years of age by riding horses, tramping out wheat. The sum thus gained he invested in a pig, thus entering upon his first business transaction. He sold the pig at a profit and, as he found opportunity from time to time, he purchased other stock until he had quite a herd of young cattle. He was a successful trader and he continued to thus engage in stock-dealing until about 30 years of age…

Editor’s Note: This item was excerpted from a local Menard County, Illinois, newspaper article submitted by Max Goff of Costa Mesa, Calif. On August 16, 1907, the Petersburg Democrat paid tribute to local resident William Goff III to mark his 85th birthday, which followed three days later. Goff was born in Green County, Ky. His parents, William and Amy (Trent) Goff, moved their family to the northwest corner of Sangamon County, Ill., in 1825, when son William was just three years old. William the father died soon after, leaving Amy with seven children to raise. The Petersburg Democrat described her as a noble pioneer woman who “not only cared for her fatherless children but also succeeded in retaining possession of the [land] claim, improving it and laying by some money.” In 1839, 14 years after the family arrived in the area, Menard County was carved out of Sangamon County, and Petersburg became the county seat. Today, Sugar Grove is a precinct of Menard Co., not to be confused with Sugar Grove the Chicago suburb in Kane Co. or Sugar Grove the unincorporated community in Schuyler Co.

To read more about William Goff III and his many business pursuits, GGFA members can log in at our website. To join the GGFA, please visit https://www.goff-gough.com.

Periodically we highlight information from past GGFA newsletters. Our archives date back to 1982 and contain a wealth of member-submitted information, including original articles, genealogies, photos, transcripts of wills, obituaries and more.

Back to top
Manage Cookie Consent
We use cookies to optimize our website and our service.
Manage options Manage third parties Manage vendors Read more about these purposes
Preferences
{title} {title} {title}