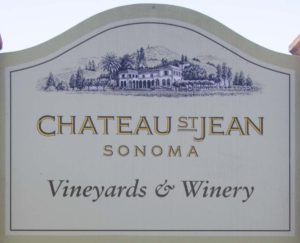 (Is a Goff family ghost still there?)

On a trip to California in June 2013, we visited the Chateau St. Jean Vineyards in quiet, scenic Kenwood, located in the Sonoma valley.  While we are familiar with some of their wines, we wanted to see Chateau St. Jean because of its history.  The winery is built around the summer home of Ernest Abner Goff, who was a second cousin of my grandmother.  I had also heard a story from a distant cousin about Ernest Goff’s daughter, Camilla, who sadly died as a teenager.  Some legends say that her spirit still visits the old family home.

Ernest Abner Goff was born 24 March 1872 in Michigan, son of Gilbert B Goff and Emily Marsh.  Ernest’s paternal great grandfather was Rev. Abner Goff (1782-1857).  While my branch of the family stayed in Ohio and remained poor farmers for another couple of generations, Gilbert B Goff moved to the wilderness of Michigan and became successful in lumber.  Ernest followed in this tradition, also developing interests in mining and more lumber in the Pacific northwest.  He bought this property in Kenwood and built the home which his family occupied in 1920.  It remained in the family until the 1970’s.  Camilla died on 27 Sep 1928 at the age of 18 at the family home in Michigan.

While we visited the winery we asked a couple of the staff about the rumors that the ghost of Camilla Goff was still present in the home.  Several acknowledged the stories.  One, whose office is now located in what was Camilla’s bedroom, told me that she will come back to her office to find her chair moved.  She also described how a wine glass mysteriously moved during a tasting.  Camilla, it seems, has a reputation as a trickster.