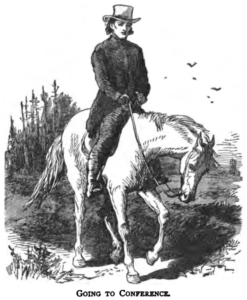 One of my most cherished church records is a tribute to my 3rd great grandfather, Rev. Abner Goff published in the Minutes of the Ohio Annual Conference of the Methodist Episcopal Church in 1857, the year of his death.  Born in 1782 in Vermont, the Goff family came to Ohio in 1813, purchasing land in Newton Township, Licking County. Within a few years Abner was licensed to preach within the Methodist circuit.  During the next 25 years of ministry he traveled extensively throughout central and north central Ohio, covering many circuits. A Google search produces listings of many marriages performed by Rev. Goff, as well as listings among the clergy in several Ohio county histories.

Abner Goff married Patty Hudson in 1800 in Clarendon, Rutland, Vermont. They had four children before coming to Ohio in 1813: Mira, Shadrach, Delano and Varnum (Vernon), my great-great grandfather. They may have had other children after coming to Ohio.From the tribute published in 1857:

Brother Goff was acknowledged by all who knew him to be a good man. His moral, religious, and ministerial character was unblemished and irreproachable. He was held in the highest esteem by his neighbors, and those with whom he associated. In the society and community where he lived thirty-five years, no preacher was heard with more pleasure than brother Goff, and he was always ready cheerfully to labor to the extent of his ability, when necessity demanded.